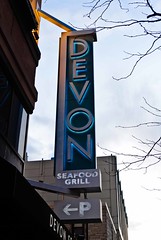 Recently, I bit down hard and started a Chicago Alphabet Soup page on Facebook. For all the kicking and screaming I did as far as delving into social media, it was a good idea. There is still something of a human touch missing. Friends had told me to add Twitter, Tumblr, and a few other brand name social media outlets to my repertoire. I will slowly add them. One avenue that I thought would be good would be to actually engage people outside of my inner circle for advice, feedback, and recommendations. So, I found myself on the Meetup.com site searching for some foodist-photographer groups. There was one that stood out since it seemed to focus on the photography aspect of being a foodist. As much as I would love to claim major photography skills, there is a lot that I need to learn still. I figured I would recalibrate myself to hone my still shot skills and then indulge Twitter and other social media after a bit of more polishing. All of that research had left me with an appetite.

I called a great friend and mentioned that I was considering going to Devon Seafood Grill at 39 E. Chicago Avenue for my favourite American culinary fare — seafood. It was early in the afternoon and I knew that going before 6:00 PM would mean getting there before all the nouveau laissez faire parents arrived with their little wicked Damians and Rhodas to make a complete mess of the whole dining experience. Ah, but we opted to sit upstairs in the bar area, which solved the problem of witnessing bad little kids doing God knows what all it takes to get their parents’ attention. My great friend and I knew we would have no disturbances while she enjoyed her X-rated martini and I enjoyed my flight of whiskey cocktails.

Unlike some people we have heard ordering chicken fingers at ethnic eateries that don’t even have fancy baked chicken on their menu, we started with tuna tartar. Served over cucumbers and accented with a wasabi sauce, ginger, and wafers, we were rather glad that we had braved the bite of the wind coming off Lake Michigan. The cucumbers had a faint flavouring of ginger, although not atop the ginger. The wasabi drizzle did wonders on clearing our heads. Of course, there was sipping — my friend enjoying her X-rated martini flavoured with raspberry and lemonade and me mouthing off at how much I was enjoying my whiskey cocktail flight. Having started this whole thing with ordering flights of cocktails at restaurants, knowing that flights are not on the menu, our server lit up like the Christmas tree at Rockefeller Plaza. Turns out she was not only a server, but she was also a bartender. And her talents are top. The Maker’s Market basil and lemon whiskey cocktail, the twist on a mint julep, and the twist on a sidecar left me speechless for the greater part of ten minutes. My friend and I acknowledged that we will request her when we return. If she’s not there, then we’ll come back when she is.

Now, I had mentioned that I had an appetite earlier. That was no lie. The warm biscuits that came to the table with the dollop of honey butter put Southern biscuits to shame. There was a shrimp tempura sushi roll that rivalled the same sushi rolls I have had at countless top-notch Japanese sushi bars. When Devon Seafood Grill says that they get their seafood in fresh daily, the wow factor in their sushi is an indication that they are not lying. Another rather substantial appetizer that we ordered was the lobster tamale. This was nothing short of bliss in a creamy gravy and we all but picked up the plate and licked it after we had finished. Still, I must admit that one of my main reasons for wanting to go to Devon Seafood Grill was for their lobster roll. I rolled my eyes with each bite, and I don’t mean as in being cheeky. Add to that my habit of humming when food is good.

But now a good hour had passed and we were ready for more, yet something light. And then came a bowl of mussels to the table with garlic bread. People on self-imposed diets are wishing they had a thread of our hair for their voodoo dolls that they would torture relentlessly. I’m bald, by the way, however, my friend isn’t. There is almost a guarantee to get a batch of mussels full of sand in them. That was not the case with the batch we had. The sauce that they were swimming in was perfect for sopping. With a few more pieces of toast at hand, we made the sauce disappear.

By now, my friend had finished her martini and I had downed my flight of cocktails and a few glasses of water. My friend had a sip of my sidecar and was so pleasantly pleased that she ordered one of her own. I ordered another one. These were a few notches past ideal with the mixed platter and the plate of halibut. The mixed platter came with sea bass over mashed potatoes, haricot verdes, scallops, shrimp, and crab cakes. For those of you who are based in or around Maryland, Devon Seafood Grill prepares crab cakes the way that they are supposed to be done — with lump crab and a few crumbs to hold the crabs together, not as a cake with essence of crab. The halibut, flaky and wonderful, came with a lobster risotto and mashed potatoes. This was also a few notches past satisfying and all of it went bye-bye in appreciation of its great taste.

Devon Seafood Grill is one of the incredibly good seafood restaurants in Chicago proper. Yes, there are a lot of seafood restaurants that tout divine food, but quite a few have service that doesn’t balance the output from the kitchen properly, and that often detracts from an enjoyable experience. Devon Seafood Grill does an outstanding job of making sure that patrons’ dining experiences are worthy of return visits. Well, for disclosure, my experiences have warranted repeat visits — barring the episode where a little Rhoda threw her knife, fork, pen, and sticky pad at me in a fit of solidarity against her hands-off parents. One thing I shall note is that the price is not cheap. It is not exorbitant either. For those who go and want to enjoy your meal, I highly recommend sitting upstairs in the bar area. You still get great service. Yet there is an adult atmosphere upstairs where you can also enjoy some great bar service and conversation without yelling if you’re on a date. And if you want to take a chance on getting a flight of some beverage, request a flight of whiskey cocktails. Take your spacesuit because you will shoot straight for the stars thereafter.