Up until the 90’s, Chicago’s go-to neighbourhoods for restaurant life were in the neighbourhoods that bordered Lake Michigan north of downtown. By the mid-90’s there was a new stretch of go-to neighbourhoods along Milwaukee Avenue and the Blue Line elevated train. Gold Coast, Lincoln Park, Lakeview, Uptown, Andersonville, and Edgewater now have competition. West Town, Ukrainian Village, Wicker Park, and Bucktown started gaining popularity, as swanky boutiques, independent coffeehouses, intimate restaurants, and nice housing filled the landscape. And none of the restaurants and shops were disappointing. For example, there is Rio’s D’Sudamerica at 2010 W. Armitage Avenue in Bucktown neighbourhood, where you can have some of the best, authentic Peruvian cuisine in the city.

A short trip from the now-popular Logan Square, I met a friend so that I could get an entry on Chicago Alphabet Soup for Peru. She started with a lemon drop martini and I started with a mojito. Compliments to the bartender for mixing drinks that weren’t watery or overpowering. To quote Goldilocks, “It was just right.” My friend had been to Rio’s D’Sudamerica before, so I accepted her recommendations. One that sounded rather pedestrian was papa a la huancaina. This is now my favourite potato salad. The creamy sauce made the dish a dream. With us being seafood fanatics, we also ordered a dish of camarones en costra de quinua con pure de yuca-rocoto y salsa de maracuya. Four plump shrimp, encrusted in quinoa, were served over yucca seasoned with rocoto, olive oil, and lemon juice glazed with passion fruit sauce. Who in his or her right mind would want to awake from this dream? 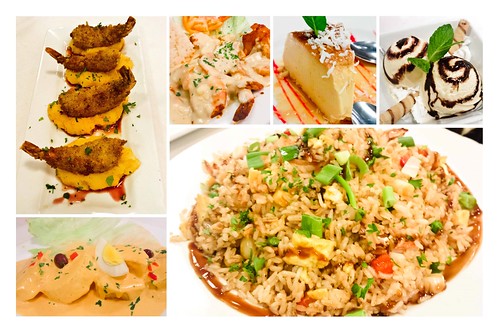 As if the appetizers weren’t divine enough, there was a platter of camarones a la plancha for an entrée. It would be hard to tire of eating sautéed shrimp that had been cooked in a red chili sauce and topped with a garlic and butter cream sauce. Served with white rice that actually had flavour, this was an entrée to enjoy slowly. Although I have had camarones al la plancha before, this was the first time I was silent because it was so lip-smacking. The dish that was new to me was the plate of arroz chuafa con camarones. I have had my share of Chinese fried rice and liked it. However, I am now in love with Peruvian fried rice and the shrimp that exploded in this rice dish that was sautéed with green onions, egg, ginger, and soy sauce was absolutely addictive. I am a fan.

Because the appetizers and entrées were hearty, we sat for awhile and let our bellies settle before our final attack on some desserts. Light in texture, full of flavour, and heavy on the arteries, we had flan Peruano. This was not a regular flan, for it was creamy. The texture was not like that of old Jell-O, but like slicing through a cloud. Not drowned in a caramel glaze, it wasn’t sugary, which made it that more enjoyable on the palate. The dessert that could result in a continuous, long line outside of Rio’s D’Sudamerica is the lucuma temptation. This ice cream, which is made from the lucuma fruit, yielded the flavour of dulce con leche. Had we not been sated, I would have ordered another dish of it.

Rio’s D’Sudamerica has a large interior with plenty of seating. Because the food on the incredible scale is perhaps a 20 on a scale of 1 to 10, the restaurant fills up quickly. As always, I am a stickler for quality of food, service, and price. Rio’s D’Sudamerica blew me away on all three. This is one of the reasons why Bucktown is one of the sought-after neighbourhoods in Chicago. It is definitely the main reason I have an entry on my calendar for a return in a few weeks.