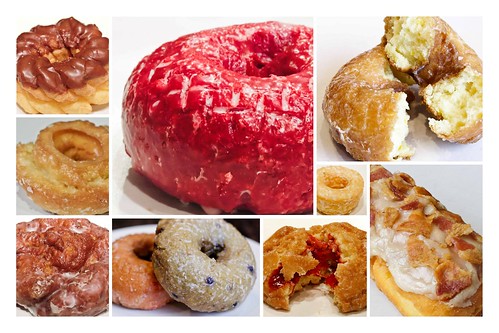 Only a few years ago, cupcakes were all the rage in Chicago. It seemed as though new cupcake shops were opening doors monthly. They peddled cupcakes baked with Duncan Hines, Betty Crocker, or Pillsburry cake mix, and heaped high with two to three inches of frosting. Now it seems as though doughnuts are going through a renaissance. In the same fashion as cupcakes, you can get your doughnut piled high enough with frosting and toppings to make the tooth fairy brim with delight.

Several months ago, while heading home from Oak Park, I had a taste for some doughnuts. I was not in the mood for Dunkin Donuts and I definitely was not craving any of the “artisanal” variety. I did a quick search on my phone and saw a listing for a doughnut bakery named Somethin’ Sweet Donuts at 5112 W. Fullerton Avenue. On the first visit, it would be cliche to say that “the rest was history” after the purchase. Having kicked myself for buying only four doughnuts would be more fitting. What doughnut bakery is open at 8:30 PM and sells doughnuts that are as fresh as any you would buy at the break of dawn when they open for business? I was addicted. And given that my teeth didn’t ache from having to work them through an inch of some excessive decorative sugar, I was in love.

Fast forward to the present and I have just finished washing my hands after devouring a cherry doughnut while taking a cup of tea. I have been returning to Somethin’ Sweet Doughnuts every Friday after work — a ritual now — to purchase an assortment of 4-6 doughnuts. I was shocked at the cost the first time I had bought a dozen because the cash register showed a total considerably less than what I’ve paid when I’ve bought the same quantity from any of the popular doughnuteries. (There’s a new word for you.) I get the fascination with the brand name bake shops and during my youth when sugar was supreme in my diet, I could consume a doughnut heaped high with 3-4 ingredients. I can’t do that now. I prefer to taste the actual doughnut, not just the toppings.

I was in my twenties the last time I had a doughnut that didn’t make my gums throb. We’ll leave it at that was a rather long time ago. Somethin’ Sweet Donuts has won my heart (Best Customer Service) and my stomach (Best Doughnuts).