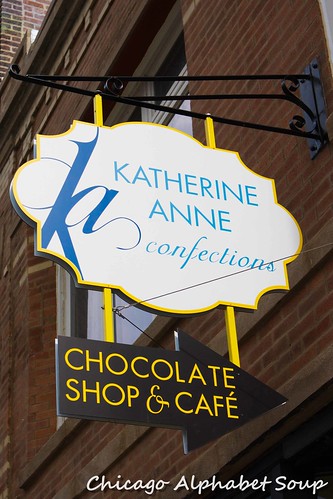 When I moved to Chicago, Logan Square was not viewed as a favourable neighbourhood. With Wicker Park and Bucktown to the southeast becoming congested, Logan Square became the next sought after neighbourhood in Chicago’s Near Northwest area. Restaurants, boutiques, cafes, coffeehouses, and lounges are filling in the landscape. During my six years of living in Logan Square, it is undergoing a slow and seemingly well-planned renaissance. There are plenty options to partake of for those who have made Logan Square their home. Not far from my favourite Italian restaurant is an option that I have enjoyed by the name of Katherine Anne Confections at 2745 W. Armitage Avenue.

For my first sit-down visit, I wanted to try something from the sandwich menu so that I had more than just the hot chocolate I had planned to order. Now, I am not a fan of sandwiches at coffee shops and sandwiches on the menu at chocolate shops are unheard of. The turkey bleu at Katherine Anne Confections changed my mind — at least for this shop. The bread was fresh and the ingredients were not simply heaped on. I was won over. And I was completely wowed with the Mexican hot chocolate. This was not Nestlé’s and by the nth sip, it was clear that it wasn’t Hershey’s either. There was not even a hint of a milk chocolate taste and the spice added to it made it evident that they must use dark chocolate instead.

My second visit was more in passing. I’d had a heavy lunch but wanted a little something extra before going home. So, I stopped in for a cup of hot chocolate and relaxation. Because the Mexican hot chocolate was a winner, I chose a cup of hazelnut chocolate with vanilla pepper marshmallows. Accented with chopped hazelnuts, having this option on the menu can result in long lines hanging outside of the shop during the chilly months. It is hard for me to say whether I loved the Mexican hot chocolate or the hazelnut hot chocolate more. And then there were four truffles for take-away. I told the cashier to pick four. I know one was hazelnut, one was raspberry, and one was a fire chocolate. As to the fourth, it was divine, if I can call that a flavour.

Those who work at Katherine Ann Confections are not only charming, but they are also outstanding with their delivery of service. If you are indecisive, they never rush you. If you appear to want recommendations, they offer them without being pushy. I have had coffee for take-away and each cup has been great. The sit-down experiences have been fantastic. For a neighbourhood haunt, this is a splendid chocolatier and you may feel like Charlie at Willy Wonka’s chocolate factory once you sink your teeth into some of the delectable chocolate truffles or get a chocolate from any of the swell cups of hot chocolate. Come with me and you’ll be in a world of pure imagination.