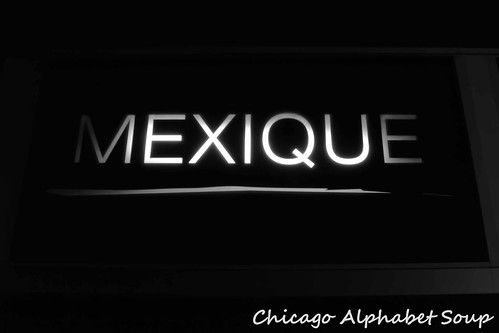 For the past few years, I have been going to a few restaurants in the West Town vicinity of Chicago. During the summer, I got to see much of the area while on foot. One restaurant I passed by several times was Mexique at 1529 W. Chicago Avenue. There was a “white table-cloth” feel to the restaurant and with that in mind, I never went in because I was usually in short pants and walking shoes. So, I decided that I would go one evening after work when I was better attired.

I considered having the dining experience be more ala carte. And then I decided that I wanted a sampling of several menu items. The 6-course tasting menu was the better option. Having received the explanation that the food at Mexique is Mexican with a French influence, I knew that I couldn’t go wrong with a seafood approach to the tasting. While I waited for the courses to arrive, I had black bean purée and chicken pâté with French bread. The black beans as a purée instead of thick frijoles was great for spreading as was the spicy pâté, both a great complimentary start and marriage between Mexican and French. 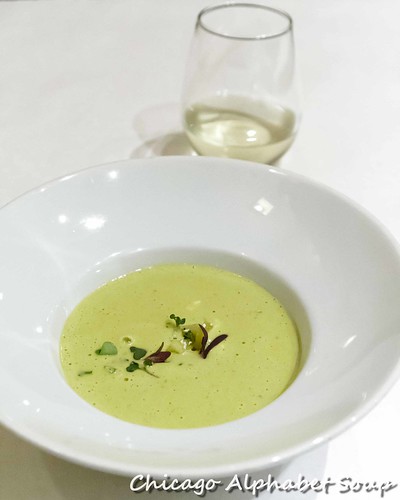 The first course was poblano pepper soup accented with feta cheese, pineapple relish, quince, and celery root. The remarkable thing about this soup is that neither the spiciness of the peppers nor the sweetness of the pineapple relish overpowered the recipe. A white wine accompanied this dish, one with a lovely touch of sweetness. There were notes of peach and apricots in the wine. Smooth on the palate, it was splendid in the pairing in that it brought out the flavours of the soup rather than competing with it on the tongue. 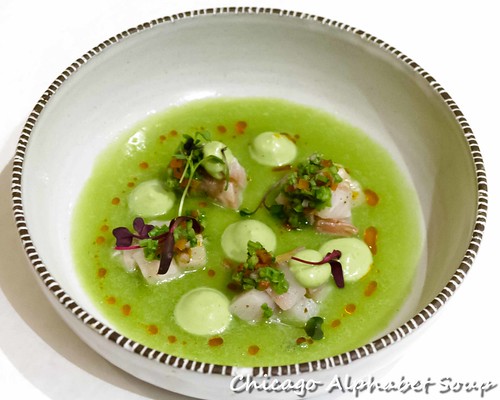 The second course was an interesting and addictive take on ceviche. Cobia fish in citrus juice was the main seafood ingredient. The French influence came in with the inclusion of the stock prepared with green vegetables, green chilies, also paprika oil and micro greens. There were small dollops of poblana mousse that, once stirred in the ceviche, made the base slightly creamy. The wine that paired with this course was a Sauvignon Blanc from a vineyard in California. There was a high mineral aspect to it, a bit tart, that again allowed the ingredients in the ceviche to pop more than they probably would have had there been no wine served with the course. 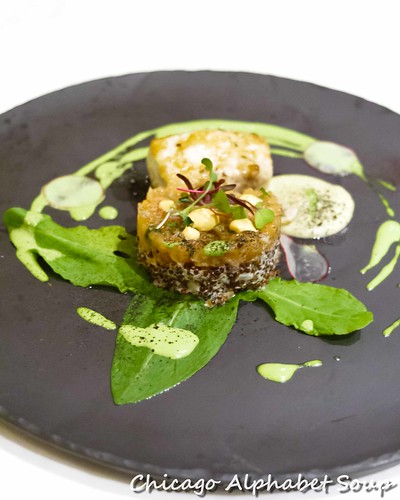 The third course was one that I initially flagged as the highlight of the evening after a taste of the first morsel. There was mahi-mahi in a lovely sorrel sauce and red quinoa with salmon tartar. The entire dish was drizzled with a burned onion aioli. Those who enjoy seafood would love sampling the mahi-mahi and the salmon tartar. Paired with this was a crisp Spanish Rioja wine, consisting of fully ripe fruits, mainly grapes that played well with the flavours of the sorrel. 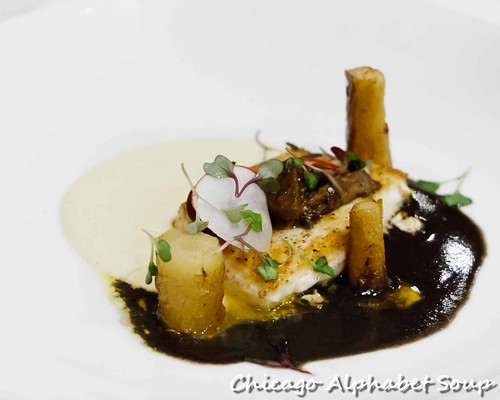 Thinking that the third course was spectacular in terms of taste, the fourth course was unforgettable. This was a whitefish with a black bean sauce prepared with a red wine reduction. The white potato purée had a surprising pop on the palate, as it was clearly not seasoned with salt and pepper only. Garnishes were baby carrots, confit style and micro greens. This course came paired with a Chardonnay. The complexity in this wine came in the form of ripe apples, vanilla, and oak. As if the whitefish wasn’t flaky and tender enough, the silky and buttery notes in the wine made the fourth course a culinary dream. 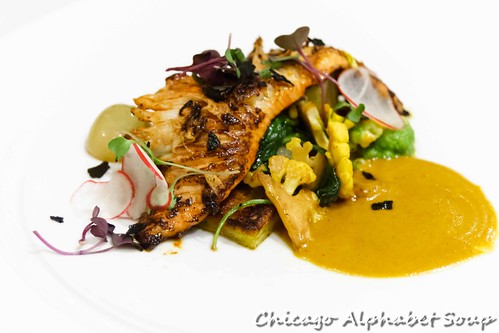 Skate with Vegetables and Grapes Over Plantain

Given each course was progressively better than the previous one, I should have known the fifth course would be a winner. This was another seafood dish, prepared with skate marinated in tequilla over spinach, cauliflower, and picked grapes, and set atop a fully ripe and compressed plantain. There was a nice amount of achiote seeds used for seasoning this dish and all of the ingredients were fantastic for letting each come through individually on the tongue. A French wine came with this dish. Medium bodied wine with notes of raspberries, strawberries, and blueberries, this was a perfect accompaniment for a dish that had so many complex flavours. 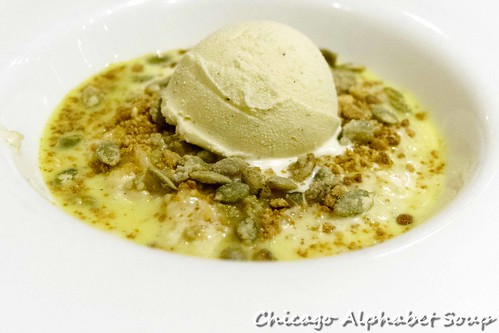 The finale was one that I had to request a pause before having it arrive at the table. The prior dishes, albeit manageable, were slightly more filling than I had expected. I figured there would be a dessert that would be familiar, but perhaps rich. Sure enough, the arroz con leche with vanilla bean ice cream. This traditional Mexican dessert of rice pudding was enhanced with rompope, Mexican eggnog, and sprinkled with candied pumpkin seeds as well as white chocolate crumble. The dessert wine with the course was and Alameda. The figs, dates, prunes, and raisins in this sherry were fantastic, which made this wine a perfect match for the arroz con leche. 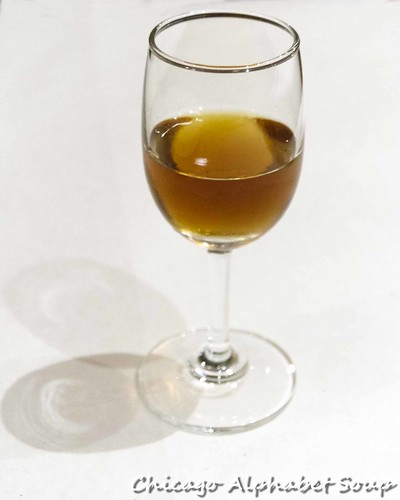 Those who are expecting tacos, enchiladas, tostadas, and traditional Mexican fare may find Mexique a bit weird or lacking in purist techniques. Even those who fancy Tex-Mex may not be okay with the cuisine either. This is not a restaurant that one may consider upscale Chipotle or a chic Mexican restaurant. Those who like variety and those with broad palates will find the ala carte and the tasting menus to be worthy of one or more visits. The sitting area is large, so there is lots of room for stretching out in preparation for dining. Make reservations, as the restaurant tends to fill up quickly. The constant influx of patrons is all you need to know that the food is good. Well, I’ve shown you pictures already. Now get ready for the taste.