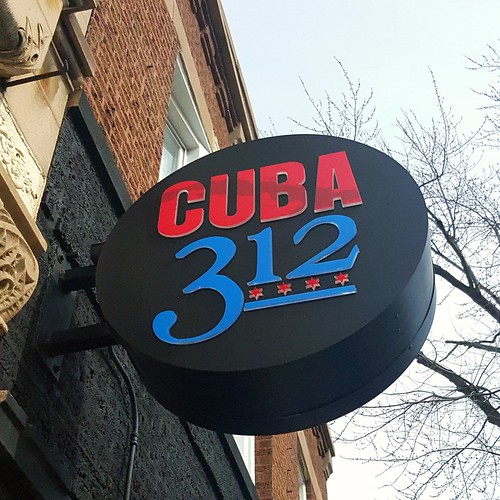 A few weeks ago while going to a restaurant in Chicago’s Roscoe Village neighbourhood, I noticed a Cuban restaurant on the landscape. Cuba 312 at 2054 W. Roscoe Street was apparently new, as of the past few months. Or I had been distracted by other restaurants on the block. Needless to say, there was no way that I was going to let time slip by me without going to see what kind of food fare they had for my appetite. 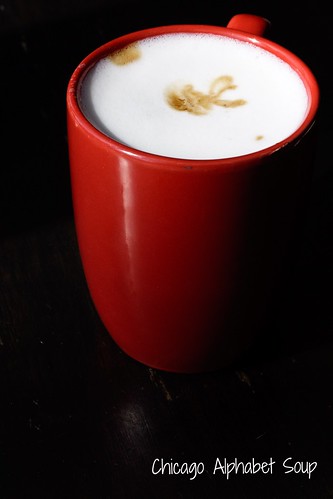 Comfy and spacious on the inside, the server greeted me with a hearty welcome. That set a tone for great customer service. And because I had arrived not too soon after the doors had opened for business for the morning, I had a bit of time to order in an experimental fashion without any rush. There were a few items on the menu that piqued my craving. I mentioned my likes and let the server make recommendations for appetizers and a sandwich.

While I waited for the food to come to the table, I had a cafe con leche. Let me say that if you go to a Cuban restaurant and turn your nose up at the option of having a cafe con leche, you should be ashamed. At Cuba 312, there seemingly was a balance to whatever measuring they did such that the cafe con leche was not excessively sweet and whatever bean they used for the coffee was of high quality. 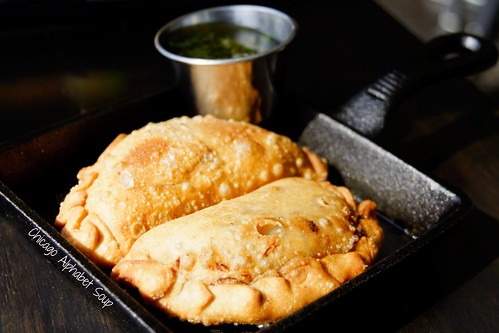 First to the table was an order of empanadas. There was a chicken empanada that had well seasoned, shredded chicken and potatoes in a savoury sauce. There was also a seafood empanada that was in another tasty sauce. Served with a chimichurri sauce, the window seat was the wrong place to sit for a display of food happiness experienced at each bite. For years I had searched for empanadas to rival some that a Chilean restaurant I had gone to served before they closed. My search ended today at Cuba 312. 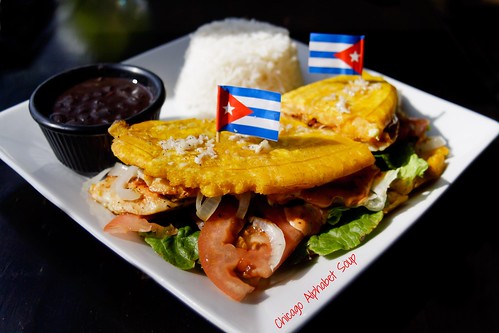 Next to the table was the sandwich of all sandwiches. I had a jibarito pollo. Many say that jibaritos became a staple born out of Cuban communities in New York City rather than off the island of Cuba. Yeah, yeah, yeah. Whatever Cuban came up with the notion of a sandwich served between tostones, or pressed and fried plantains, created a masterpiece wherever he or she was. And following in that tradition, the jibarito at Cuba 312 came with seasoned, tender chicken, lettuce, tomato, cheese, and a zesty mayonnaise that resulted in the sandwich getting undivided attention. This dish came with white rice and frijoles that also felt my appreciation. 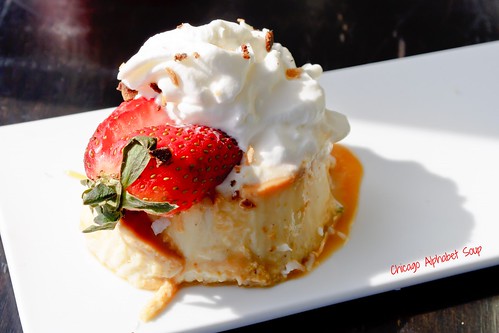 It was a casual morning, so I treated myself to two desserts. The first one was a honey pistachio flan. Wow. Once you have had a flan that is creamy, and not of the Jell-O variety, you will take a vow of never eating flan of any other texture. The server described the texture as that of crème brûlée, but it seemed less grainy, almost like a combination of a mousse and custard. Topped with whipped cream and a strawberry, this falls into the cloud 9 dessert category. And, as if the flan was not already an outstanding item, there was a cup full of coconut sour cream cake with pineapples and lime zest accompanied with toasted coconut ice cream. Jesus Christ. Muhammed. Buddha. Osirus. Odin. Zeus. Ego. Money. I think this was a feature dessert. All I can say is call ahead to see if it is on the menu. It is a must-have. 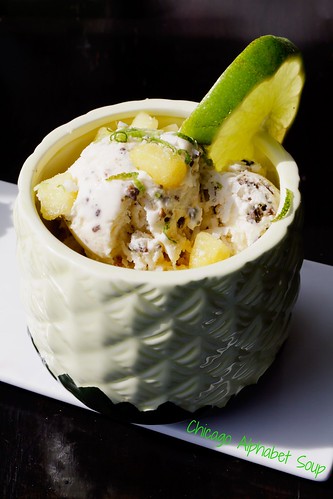 The Roscoe Village stretch of Roscoe Street between Western Avenue and Damen Avenue is a pedestrian’s fun spot. From clothing boutiques, to wine shops, to brunch locations, to eateries with international cuisine, there is something certain to appeal to your sensibilities. And if you are one who enjoys authenticity in your food, Cuba 312 is one of the few restaurants that I recommend highly. One thing that I am a stickler about in my dining experience is service and the service here is arguably top. Add to that some good Cuban food, you don’t have to wait until flights to Cuba from America open up. Va a Cuba 312 a 2054 W. Roscoe Street ahora. ¡Rapido!