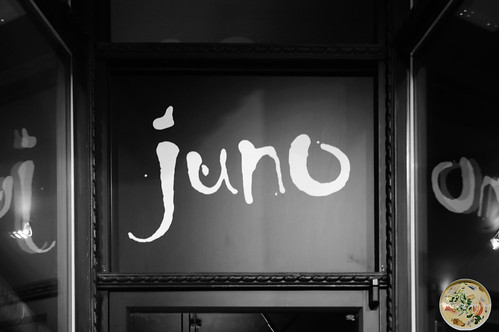 While waffling between going to my favourite Italian restaurant or going for sushi, the latter won. Juno at 2638 N. Lincoln Avenue in Chicago’s Lincoln Park was one restaurant that looked interesting and after reading a few reviews, there was some hesitation. In retrospect, the evening was one well spent. It was good that I went.

My restaurant advisor and I arrived for a 6:30 PM reservation. The restaurant was empty until 7:30 when the dinner crowd came. Then it was all high energy. There is the minimalist Japanese style to the restaurant that actually gave me some ideas for remodeling my condo. However, the food was what we were there for. As you will discover, we loved it.

The server gave us a visual description of the items on the menu to whet our appetites. Given the menu was only one page, we had no problem narrowing down selections for a 10-course degustation.

For our first landing, we had uni shooters. Two vials on ice contained sea urchins, wasabi, tobiko, orange zest, and cucumber. With the sticks that were inserted, we stirred the ingredients and downed the contents in a swallow. Not a filling course, but that was fine. The flavour was simply delightful on the palate with a pleasant aftertaste that we chose not to cleanse with our cranberry juice or sake.

The second landing arrived under a dome with captured smoke. After removal of the dome, there were two spoons of hamachi with shiitake and sweet corn. Devoured in whole from the spoons, this was the size of what one would consider a l’amuse. Still, such a small item had an extreme pop in flavour, thanks in part of the cherry wood accented smoke.

The third and fourth landings came as a pair. The Juno Queen was spicy scallop with taro and sweet potato on the top with rice in the centre and wrapped in salmon. Since the queen will always have a king, there was the Juno King, which was a signature nigiri of spicy king crab wrapped in tuna and topped with crunchy potatoes. Words cannot describe how delectable these nigiri items were. Only facial expressions would be telling. And because the two are better served together for comparison and contrast, if nigiri were a marriage, the Juno Queen and Juno King are perfect models.

The fifth landing was the first of the hot menu items that we ordered. This was a plate of grilled octopus with pickled Granny Smith apples, ao nori, and zucchini ribbons atop an eggplant purée. As plain as it looked on the plate, it was anything but bland to the taste.

The sixth landing was the server’s personal favourite and quite understandable after the first bite. Tender seared scallop sat atop squid inked fettuccine with shrimp, black bean, and chopped red chili peppers. When scallops are done correctly, the flavour profile of the scallops come through with freshness and no muddy flavour. That was certainly the case with this course, and it helped that the fettuccine was an equally scrumptious complement.

For the seventh landing, we sampled one of the signature maki rolls, the ceviche. There were whitefish, tuna, and scallions in the middle. On top were shrimp, a hint of spicy aioli, and house made pineapple salsa. With fresh seafood, this was truly Peruvian and Japanese working together in a dish at its finest.

Moving back to the hot plate items, the eighth landing was steak tataki. This was a plate of medium rare steak with Swiss chard, miso, corn, peaches, and sliced jalapeños. Again, this was a winner in flavour

The ninth landing we ordered was mushroom ramen. This landing had trumpet mushrooms, roasted corn, napa cabbage, pickles, soft boiled egg, and house made noodles in a savoury broth. Ramen has become quite popular in many Japanese restaurants. At Juno, the mushroom ramen had enough flavour appeal to make it a highly recommended ramen dish to order.

For the final landing, we had a dessert of lavender cake topped with sesame seeds, along with cantaloupe, lychee sorbet, and candied almonds. There was also a delectable citrus sauce poured in the bowl that took the dessert to a new level in bliss. Certainly not a heavy dish, but the flavours of all of the ingredients played well without any overpowering or competition on the palate. It was simply heaven.

Juno does exceptionally well with small plates, keeping in the tradition of serving dishes like in Japan. There is a bit of a high price per item, negligible for those who appreciate fine dining. Those who are accustomed to the “Chicago way,” that being restaurants giving so much food that you have to take some home, may find the cost problematic given the size of the dishes. For us, quality trumped quantity. And the service is simply outstanding. Overall, Juno was an enjoyable dining experience on three sticking points that we use to rate restaurants: quality of food, service, and price.