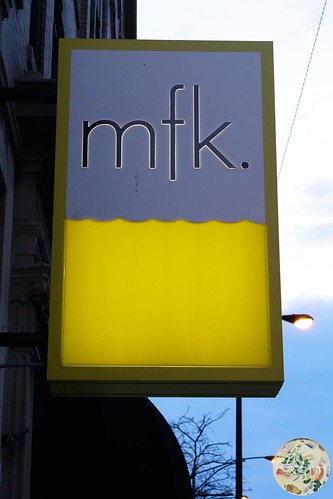 In September, 2016, I went to Spain and instead of doing the touristy trek, I opted to do a run of wineries throughout the country and to feast on tapas to counter the alcohol. It was one of my best international escapes, one that made me long for returning to Spain. And recently my restaurant advisor sent a text message with the initials mfk.

In Chicago’s Lakeview, at 432 W. Diversey Parkway, is quaint boutique restaurant mfk that focuses heavily on seafood, borrowing mostly from the cafes in coastal Spain. Unlike many restaurants that attempt to “get it right,” mfk seems to have someone from Northern Spain in the kitchen, which may explain the authenticity in the dishes that come without pretense.

To whet our palates, we started with cocktails. My restaurant advisor had a hotel nacional, a rather refreshing mix if Clement VSOP rhum agricole, pineapple, lime, and apricot liqueur. I was more Portuguese in my selection, opting for a caipirinha, very much reminiscent of the Brazilian favourite doctored up with cachaça, demerara syrup, and lime.

Having asked for five menu items as server’s choice without much review of the menu, the first landing came as ceviche. Not the usual preparation in a dainty glass with chips on the side, this ceviche came as filets of suzuki, thinly sliced, and tossed in a combination of lemon, lime, and orange juice that sat atop homemade guacamole accented with a little bit of citrus and a touch garlic, all affixed on tostados with squid ink. For each to be bite size, there was an incredible amount of piquancy and without the citrus biting at the back of the jaw. 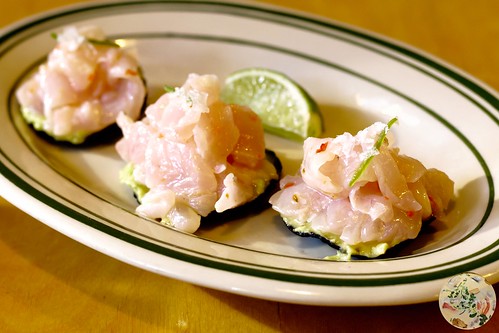 The second landing was a plate of anchovies. I fell in love with anchovies when I was in Spain and they are nothing like the horrible anchovies that people order for a pizza topping. After having these on toast accented with farm set butter and lemon zest, I guarantee you that you’ll fall in love with these tasties as quickly as I did in Spain, and with my renewed love of them at mfk. 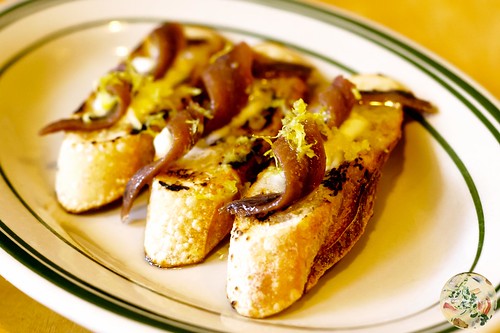 The third landing was an exotic one, a plate of crunchy prawn heads. The heads had been lightly breaded and fried. These then sat nestled atop a pepito mojo, which was a mix of different herbs, parsley, chives, and pumpkin seeds, worked up with a touch of olive oil. Not only were the shells easy to devour without them being noticeable between the teeth, but the seasoning and the mojo made for a divine dish. 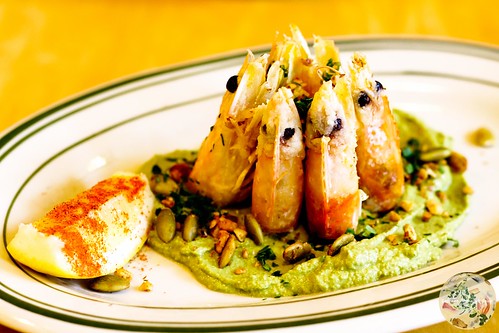 The fourth landing was a take on a favourite dish that I order at most restaurants that serve seafood fare. This was a huge bowl of Price Edward Island mussels that had been simmered in a broth of cider with a little bit of butter and vegetable stock. The plating consisted of mussels with bread crumbs, crème fraiche, dill, parsley, and tarragon, along with toasted bread on the side. I have loved mussels with saffron in the recipe, but mfk served up my absolute new mussel crush. No grit in mussels and no mushiness with each bite, they were divine with a hint of the tarragon and dill in the background. 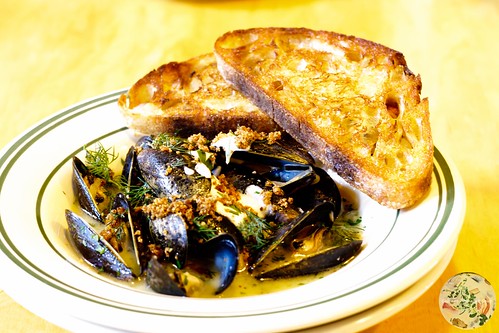 Having completed our first cocktails, we had a second round. Requesting surprises, my restaurant advisor had ranch water, which was a refreshing drink mixed with mezcal, lime, orange bitters, and topo chico. I had a marriage of Spain and Italy, a negroni prepared with mezcal insteal of with gin. People think everything tastes better with bacon in or on it. If only they knew about mezcal.

The fifth landing was a take on paella. Prepared with tomato and shellfish stock, the addition of herbs brought it up in flavor. For service, prawns, mussels, and clams were simmered and then finished with fresh herbs chopped on top and a couple slices of toast. In true paella preparation, there was saffron rice for utter enjoyment. There was so much flavor building in the recipe that while my restaurant advisor and I were practically stuffed, we did not let any of the paella go to waste. You could hear the Mortal Kombat sound byte saying, “Finish it!” 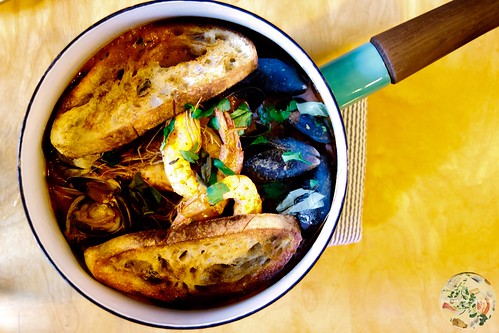 The sixth landing was a slice of the most heavenly cake you will ever have. The basque cake is simply the best way to save a failing marriage. Prepared with a generous portion of eggs, four, sugar, and vanilla, it’s extremely moist. To make the cake even more devilish, the almond pastry cream in the recipe has rum in it. Topped with almonds, there is also has a hint of salt from the salted almonds. Finished with a very nice glass of brandy, I’ll leave you with these famous words: It will save your marriage.

The dining area in mfk is very intimate. It is highly recommended that the later you go, it is better to make a reservation. Everything we had on the menu was worth a repeat visit. And a repeat visit we will entertain for a sampling of other dishes we did not have on the first visit. There is authenticity in the preparation and in the taste of the dishes. Since I have plans to go to other countries for vacation during the upcoming years, if I don’t get back to Spain any time soon, I will go back to mfk sooner than later.