With temperatures waffling between not-so-bad and cold, doing whatever it takes to avoid catching the flu, and work being maddening, it has been a few weeks since I posted a review. A Thai friend who knows that I have an appreciation for authentic, traditional dining had me join her at Krung Thep at 3205 N Halsted Street for some Northern Thai cuisine. What a surprise I was in for.

While Krung Thep has a menu of staple Thai dishes, it became evident that they also have a menu for those who are homesick for Thailand. The menu is in Thai only, not that it mattered for me, since my friend spoke Thai with the owner. From my limited Thai, I caught clutches of “just send something to the table.” That’s exactly what happened.

We started with a papaya salad. For years, I viewed salads as rabbit food and some of the recent Thai restaurants I have gone to have had papaya salad on their menus. Krung Thep won me over with theirs that had an extra kick from dried shrimp on it. Next up to the table was a bowl of traditional noodle soup that had blood cake in it. I’m no fan of offal, but I guess an indication of it being  prepared really, really good is when the flavour is actually inviting. Not one wince from me while I slurped the soup.

By the time the third dish arrived at the table, I realized that this was indeed a traditional dining experience. We had a pork soup with meat that had been cooked to the point where the bones were soft enough to chew and swallow. Quite spicy and delicious, great for the hot weather, tasty enough for me to want more. Other exotic dishes that followed were liver that didn’t taste gamey, fried pork belly that we worked with rice, herbed sausages that put all other sausage to shame, and herbed fish cakes that I now love more than Maryland crab cakes. After all that, we were stuffed and begged for no more, yet a Thai custard arrived. Loved it. 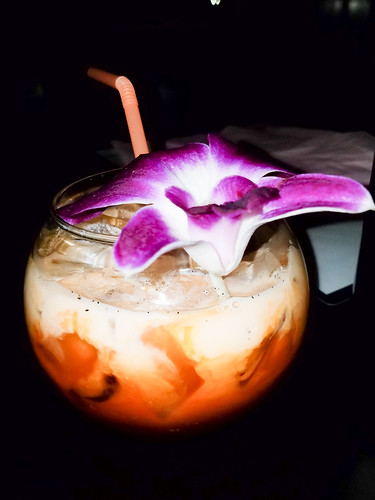 I will be the first to sample something new and I admit that I have some rigid constraints. I had no problem relaxing some of my constraints for the dishes that we had. Nothing came to the table that I found off-putting, albeit not something I would indulge regularly, but the pop in flavour and the right amount of spices left me wanting an immediate return. I know it may not be the case at a lot of restaurants with international flare, but I have a love affair with eating from the non-American menu.