A few weeks ago, I received a flurry of email notes bearing good news and invitations. I found out that Chicago Alphabet Soup had made the list of top 50 blogs in Chicago, which was an honour given this is a hobby and balance to my otherwise chaotic day job life. I received a few emails inquiring if I would be interested in guest writing for a few online publications. Getty Images picked up a few of my photos. And I got an invite to Greek restaurant Parthenon at 314 S. Halsted Street in Chicago’s Greek Town. I thought this would be nice, so that I could put faces with the names of several foodies and food bloggers in the city.

We had a variety of appetizers. There were spanakopitas, which were phyllo pastries stuffed with spinach and feta cheese. The octopus was not rubbery to the palate. It was as though the morsels had been cooked slowly for days. My first favourite appetizer was skordalia. Puréed potatoes accented with garlic, and I appreciated that the garlic was heavy-handed in the recipe. And, no, I have no fear of vampires.  My second favourite appetizer to arrive at the table was saganaki. If you think the ritual of setting the cheese aflame and the shout of “Opa!” is spectacular, let me be the first to say that you’ll want to cut through all that fanfare and have the cheese set in front of you so that you can show your appreciation or devout appetite accordingly. The most pedestrian course, as I jokingly call rabbit food, was actually good. The salad dressing, albeit light, was still good enough to let the flavour of the ingredients come through. Lettuce, pepper, olives, feta cheese, and an addiction I call tomatoes were a great segue to the main course.

With so much tasty preamble, a dish that I thought would sate me without leaving me needing assistance walking thereafter was shrimp flambé with rice. The shrimp, doused with brandy and set afire to a declaration of “Opa!” before being set in front of me, I felt slightly ashamed at devoting the remainder of my time to devouring the shrimp and enjoying the rice. The best way to get conversation out of me during dinner is before serving any delicious food or by serving something quite not all appetizing.

Having indulged so much food to this point, I cannot believe that I opted to renege on my intention for no desserts until Thanksgiving. Being aggressive with my workouts, I ordered galaktoboureko anyway. I am a fan of custard and this Greek delicacy prepared with custard and phyllo and then coated with honey was actually lighter on the stomach than I anticipated. The texture was fluffier than the creamy variety that I have gone overboard on in the past.

Parthenon is large like many banquet halls. There is plenty of space for large gatherings and if you love to dine with family or large parties of your friends, this is definitely the place. There are two Greek restaurants in Oak Park that I frequent because of the quality in the food and service. I can say without hesitation that the quality of food at Parthenon is top. With this being a planned event — that being a gathering of foodies, foodists, bloggers and food appreciators — the service was superb. I shall have to return as a Regular Joe for a proper “off the street” dining experience. I’ll be sure not to shout “Opa!” and smash my plate against the floor. 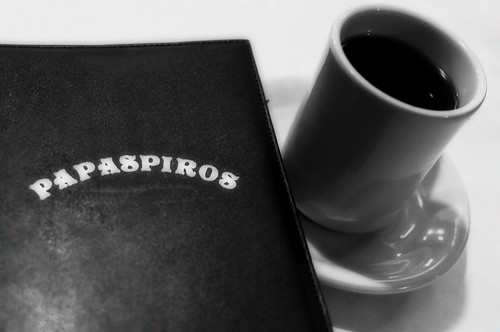 Two years ago a friend had told me about a Greek restaurant in Oak Park, Illinois, named Papaspiro’s. I went. I ate. I made a calendar notice to return. And the restaurant was closed. I have to take responsibility for procrastinating and not returning immediately after my first meal. Needless to say, Papispiro’s moved across the street, as a new restaurant named Chara moved in to take its place. I am making a calendar entry to return to the new location in a few days and I won’t put off for later this time.

The new restaurant, Chara, is a welcomed surprise on the Oak Park landscape. At 733 Lake Street, the restaurant boasts a large dining area, patio seating out front, and a menu full of authentic Greek delights. I arrived at Chara early to get a window seat so that I had enough natural light to photograph my dishes. With everyone taking advantage of the outdoor seating, I had an uninterrupted corner spot — until a couple came in and sat at the table immediately next to me. My sister, who joined me around the time I was indulging dessert, can attest to that.

In addition to the homemade, complimentary sesame seed bread, I started with a melitzanosalata. This spread of smoked eggplant, potatoes, garlic, and olive oil served with a black olive, slice of tomato, and slice of cucumber was a fantastic appetizer. Along with the melitzanosalata came pita slices that I used to scoop and devour the dip. The melitzanosalata is the kind of spread that I would serve at parties instead of the usual dips many purchase for gatherings.

For my second course, I ordered shrimp saganaki with feta. Plump shrimp served with roasted bell peppers and onions, and topped with feta, I was all done with it before I realized that it was not the same as regular saganaki — the cheese that is brought to the table and set aflame. Although the shrimp saganaki with feta was more like a salad, the portion was enough to be an entrée.

Because I was hankering for some seafood, I was quite happy to find bakalo on the menu. The pan-fried cod was mild in flavouring and the seasoning was faint. However, there was still enough pop in each forkful to make the dish appetizing. And not having a fishy taste to the cod made it that more enjoyable. Adding to that the side of skordalia and the rice pilaf covered in a tomato based gravy made this my favourite Greek entrée. The mashed potatoes of the skordalia was actually a nice spread for the fish. But the rice pilaf with potatoes, carrots, and zucchini balanced out the mildness in the cod.

With the seafood dish, I wanted a glass of wine. I had told my server that I wanted a white wine, which is fitting with seafood and poultry, and he mentioned that he would bring a nice wine for me. I had not given any specifics (e.g., a dry white wine or a sweeter white wine) and I was thoroughly satisfied after my first sip. There was a combination of fruity highlights and floral notes. As I am sure that there could have been any selection of wines to accompany the cod, the glass of nectar that I had simply could not be surpassed with any other choice.

By the time I had finished my entrée, my sister had sent a text message to me to say that she was nearby. So, I waited and let my food settle some. Once she arrived and ordered, I opted for a dessert. There was baklava on the menu and having had that to excess as of late, I inquired about a certain Greek dessert that I think would be a sin to miss having at a Greek restaurant. I was curious as to whether there was galaktoboureko on the menu. To me, galaktoboureko is truly a slice of heaven, not just custard with a phyllo crust drizzled with a honey glaze. I enjoyed it very, very slowly along with a pot of peppermint tea.

With change, there is not always the guarantee of improvement. I only had one dining experience at Chara’s predecessor, Papaspiro’s, so I never got the opportunity to develop an attachment to the restaurant. I will admit that after only this one meal at Chara, I have developed an attachment to their fare. Part of it was the friendly service, which actually sets the tone for how great one will enjoy a meal. It also helped that the food was superbly appetizing. It was a package that I could not deny spiked my appetite. And if I were of lesser scruples, I would have stood at the end of my experience, grabbed a plate, smashed it against the floor and yelled, Opa!!!!!